year, three of the top five bestselling phones worldwide were Samsung phones, according to Counterpoint Research, holding the number three, four, and five spots after the iPhone XR and 11. If you live in the US, when you think of Samsung, you probably think of the Galaxy S or Note — but the Samsung phones that sold so well were midrange Galaxy A-series phones.

Samsung is making a big push to sell more of these phones in the US with the $399 Galaxy A51. That price puts it in direct competition with the iPhone SE, but there are plenty of other Android phones that come in under $500. What makes the A51 different is Samsung’s marketing budget and partnerships. It is available unlocked on Amazon and Samsung’s website, which is significant for a midrange Samsung device, and it’s also on AT&T, Verizon, Sprint, and Xfinity Mobile.

Compared to the iPhone SE, the A51’s main draw is its screen, a big 6.5-inch OLED. Samsung is saying the phone is “awesome” across three specs: screen, camera, and battery life. It even made a bonkers meme-filled ad to drive those points home. (You should watch it because the ad really is awesome.) The Galaxy A51, sadly, is not quite that good.

OUR REVIEW OFSAMSUNG GALAXY A51 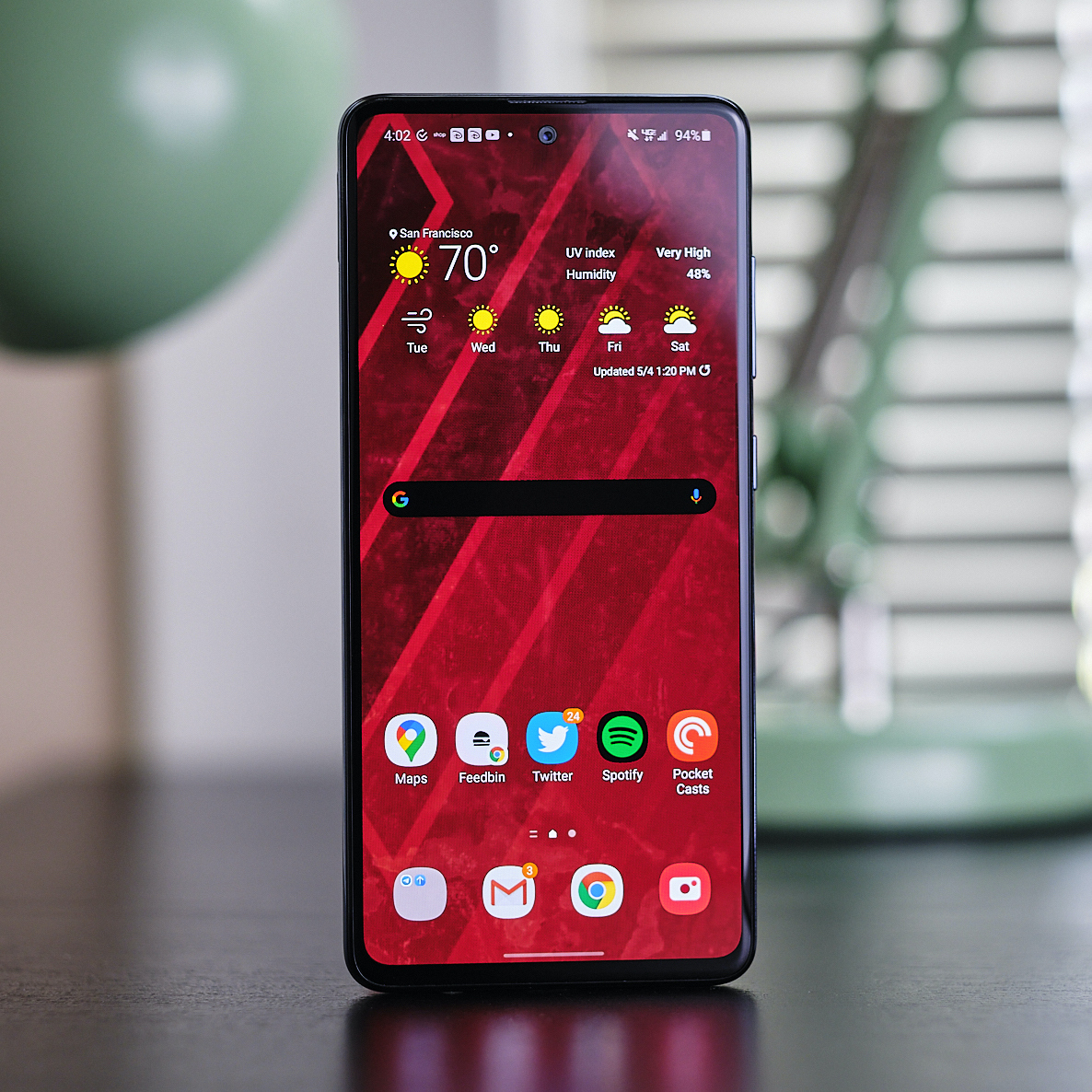 Galaxy A51 doesn’t look or feel like a cheap phone at all. It is big and well-put-together. Samsung says that the material it’s made out of is called “Glasstic,” which sounds way chintzier than it feels. It feels nearly like glass, but it has just a bit of that hollow feel you can get from plastic.

It ships with 128GB of internal storage, which borders on very generous at $399. Plus, you can expand it with microSD storage. There’s also a headphone jack, which is a welcome inclusion at any price point but somewhat more important than usual at this one.

My favorite part of the Galaxy A51 is the screen. It is simply a well-done 6.5-inch OLED, bright even in sunlight. If you’re looking for advanced screen tech — like colors that adjust to the ambient light, high refresh rates, or even super high resolution — look elsewhere. But at 1080 x 2400, there are more than enough pixels, even at this screen size. I’ve seen plenty of low-rent big screens on Android phones, and this isn’t one of them.

Every phone has trade-offs, and $399 phones have more than $1,000 ones. So phone makers need to pick their priorities, and Samsung clearly picked the screen. Given that it’s the thing people look at and interact with hundreds of times per day, it’s a good thing to pick.

But I can nitpick — not about the screen but about what’s underneath it — specifically, the hole-punch selfie camera. I have no problem with hole-punch cameras. In fact, I generally prefer them to notches of any size. But for reasons surpassing understanding, Samsung put a small chrome ring around the camera. It catches at certain angles when the light hits it just so, and then it’s hard to unsee it. It’s bizarre.

The other thing under the screen is an optical fingerprint sensor. I’m not sure if Samsung just doesn’t have enough reps in with these sensors or what, but it’s terribly slow. It can take as much as a second for the green animation to jitter its way through to let you know the phone is unlocked. It’s not the most accurate sensor either, especially in direct sunlight.

Unfortunately,Unfortunately, that assessment extends to the processor and RAM as well. In the US, most familiar Samsung phones use Qualcomm processors, but this A51 uses a Samsung Exynos 9611, a midrange chip that isn’t quite up to the task of making this phone feel snappy. Apps take a long time to load — especially if they haven’t been opened recently and so aren’t already active in the 4GB of RAM.

Once you’re in a browser or an app, things move along at a decent enough clip. But every now and then, it struggles to render a screen or load up the next thing in your feed.

As I said, different phone makers have to pick their priorities on these less-expensive phones. Apple, for example, kept the same-old iPhone 8 body with its smaller screen and massive bezels for the iPhone SE, but it put in the fastest mobile processor available: the A13 Bionic. Samsung chose differently.

Battery life is okay, but it doesn’t quite hit Samsung’s claim that it’s “long-lasting.” I’m getting just over a day — better than I could on the iPhone SE for sure. But with a 4,000mAh cell and a 1080p screen, I was a little surprised I didn’t get much better. In theory, those specs should have added up to something much more impressive, and I wonder if perhaps that Exynos processor is partly to blame.

Finally,Finally, there’s the camera system, which consists of more lenses than necessary. The main lens has a 48-megapixel sensor that kicks out 12-megapixel images by default. Those images are, like virtually any camera these days, decent enough in good lighting. I was pleasantly surprised to see good white balance, something that Samsung sometimes misses on. But Samsung’s other bad tendency of unnaturally lifting shadows is still sticking around.

You probably know what’s coming: it falls down hard in low light — worse than the iPhone SE, in fact. And when you really zoom in on details on the A51, there’s a lot more mess than you’d get on other smartphone cameras — including at 48 megapixels. GRID VIEW

There’s a 12-megapixel ultrawide and a 5-megapixel macro camera, each of which is more about having fun than getting great shots. Fun is good! I enjoyed using these cameras. There’s also a “5-megapixel” depth camera that didn’t appear to do anything useful, at least as far as portrait mode is concerned. Finally, the selfie camera is 32 megapixels, and it produces photos that often look over-processed.

Lastly, the software. Samsung’s One UI customizations on top of Android continue to make using a big-screened phone nicer. But Samsung’s willingness to let carriers junk their phones with crapware also continues: my Verizon-based review unit was absolutely littered with games and services nobody would want. I also wish I could say that I trust this phone will get software updates for more than two or three years.

Of the three “awesome” things Samsung promised, I think the Galaxy A51 only hits one and a half of them. The screen is awesome, the battery life is pretty good, and the camera doesn’t impress. The Pixel 3A (and, presumably, the impending 4A) and the iPhone SE shocked at how good their cameras are for $399. But the A51’s photos definitely look like they come out of a midtier phone.

Making a good $400 phone is difficult, and none of them can be awesome across every possible metric. But you want at least a few parts of the phone to feel like they came from something much pricier. Except for the screen, not enough of the Galaxy A51 is awesome.

AGREE TO CONTINUE: SAMSUNG GALAXY A51

Every smart device now requires you to agree to a series of terms and conditions before you can use it — contracts that no one actually reads. It’s impossible for us to read and analyze every single one of these agreements. But we started counting exactly how many times you have to hit “agree” to use devices when we review them since these are agreements most people don’t read and definitely can’t negotiate.

To use the Samsung Galaxy A51, you must agree to:

There are many optional agreements. If you use a carrier-specific version, there will be more of them. Here are just a few:

There may be others. For example, I already had a Samsung account, so I didn’t need to agree to more terms for that. Samsung’s Weather app also has its own privacy policy that may include sharing information with weather.com.

Finally, if you get a carrier version of the A51. The Verizon edition we tested had options for Verizon’s location, app info, cloud services, and even a “Digital secure” virus service — none of which are necessary but all of which are persistent and annoying during the setup process.

Final tally: there are four mandatory agreements, about eight optional ones I expect most users will want to agree to, and four or more carrier agreements I hope most users say no to.