The Secretary to the Government of the Federation (SGF), Boss Mustapha, is embroiled in a battle for supremacy with Power Minister Sale Mamman over the removal of Usman Mohammed as the Managing Director of the Transmission Company of Nigeria (TCN).

Mohammed’s sack was conveyed in a statement issued by the Special Adviser to the Minister of Power on Media and Communications, Aaron Artimas. 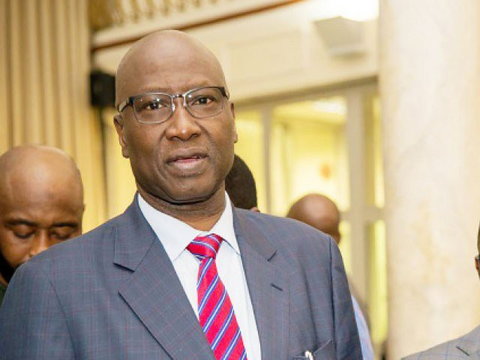 “As part of continuing measures to reposition and improve the performance of the power sector in the country, the Minister of Power, Sale Mamman, hereby announces major changes in the Transmission Company of Nigeria.

“Accordingly, the Managing Director of the TCN, Usman Gur Mohammed has been removed from office with immediate effect. He is being replaced with Sule Abdulaziz as Managing Director in acting capacity,” the statement from the minister’s office read tersely. 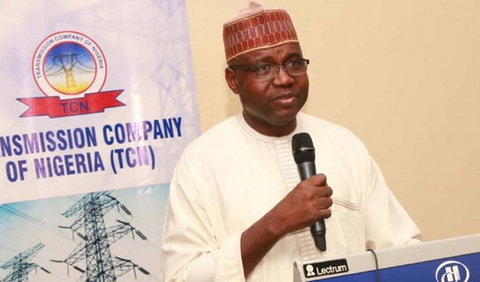 Olamond Naija  understands that Mustapha is doing everything to reverse Mohammed’s sack–a move that has seen him cross swords with Mamman.

Highly placed sources in Nigeria’s capital city of Abuja tell Olamondnaijablog e that the decision to fire Mohammed became inevitable after allegations bordering on corruption, cronyism, nepotism, high handedness and disregard for due process were repeatedly levelled against him.

The memo that forced the minister’s hand

In a memo dated May 11, 2020 and addressed to the minister, the Senior Staff Association of Electricity and Allied Company (SSAEAC) accused the TCN MD of “use of fictitious works to pull out money by the same lackeys–growing from N5-10m per day, using same to compromise agencies to evade prosecution and to help himself;

“Award of contracts to himself at higher costs after termination of running contracts, manipulation of bids to favour himself and his agents, diversion of equipment containers from the ports without records in stores, advertisement of new bids in the papers while abandoning over 150 projects nationwide for pecuniary interest and use of IGR and loans for projects to avoid supervision and appropriation by the nationfal assembly.” 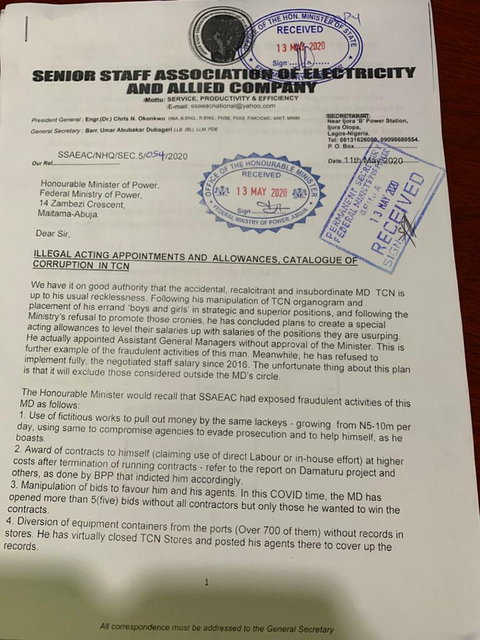 A source in the power ministry tells Olamondnaijablog e that “Mamman was left with no option but to pull the rug from under Mohammed’s feet after some of these allegations. Mohammked’s position became untenable, in a mannerj of speaking.”

However, in a circular dated May 19, 2020, and addressed to the Chief of Staff, ministers, the central bank governor, chief executives of parastatals and special advisers, among others, SGF Mustapha frowned at Mamman’s sack of Mohammed and issued “approved disciplinary procedure against chief executive officers of federal government parastatals, agencies and departments.”

In the circular exclusively made available to Olamondnaijablog , the SGF wrote that “when an act bordering on serious misconduct against a CEO is reported, it shall be the duty of the supervising minister through the permanent secretary to refer the matter to the governing board for necessary action in line with the relevant provisions of the Establishment Act and the principles guiding Chapters 3 and 16 of the Public Service Rules;

“The board shall in line with due process, issue him/her a query requesting an explanation with respect to the specific act(s) complained about;

“The board shall forward its findings and recommendations to the minister for further consideration and necessary action.” 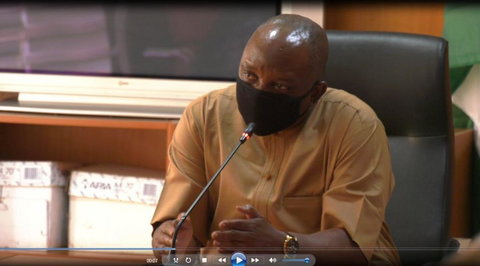 SGF Mustapha would go on to issue a warning to Mamman and other ministers.

“This procedure shall serve as a mandatory guide and all Ministers of the Federal Republic of Nigeria and any other public officer in similar supervisory position, are enjoined to strictly abide by its content.

“For emphasis, on no account shall a Minister of the Federal Republic unilaterally or arbitrarily remove a serving Chief Executive Officer, without recourse to the procedure contained in this circular,” the SGF wrote. 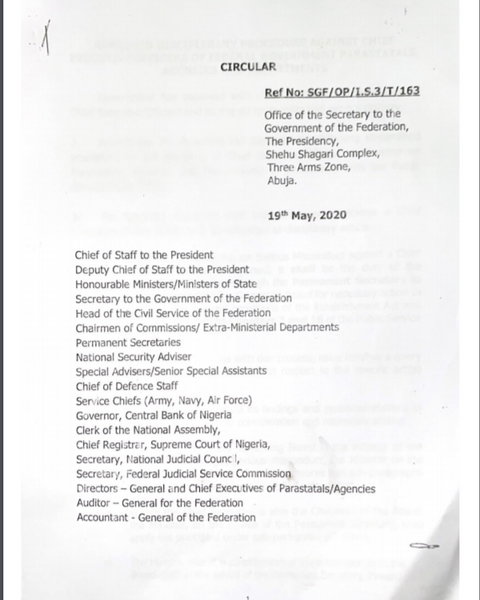 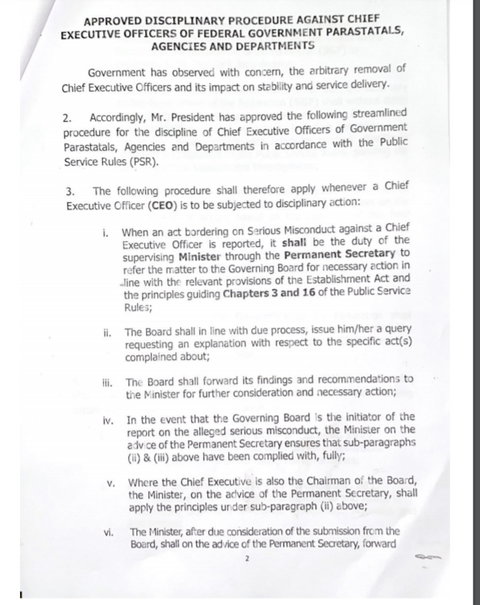 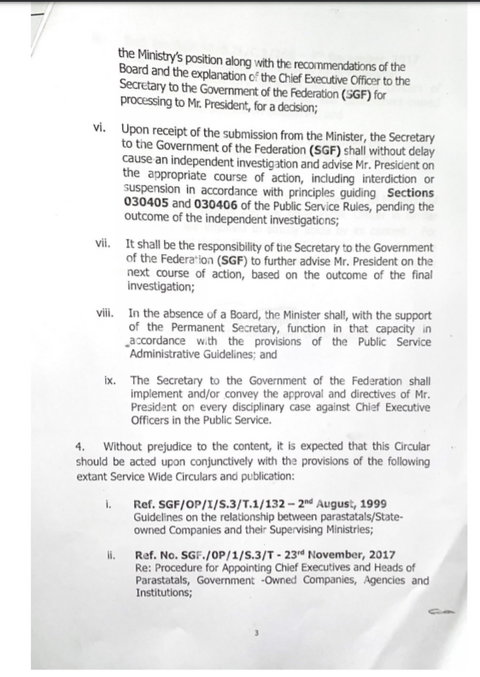 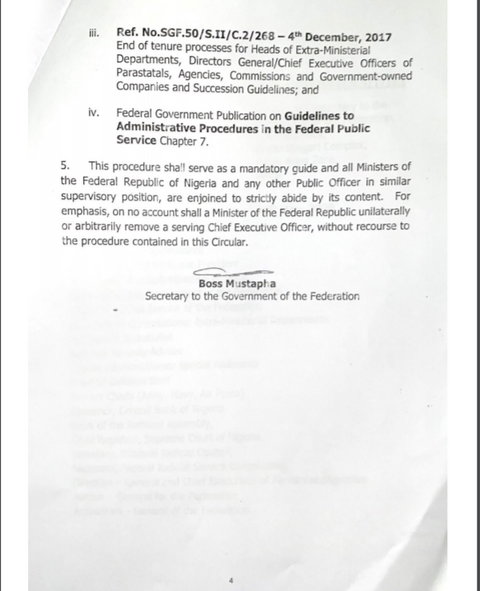 Sources in Abuja tell OlamondNaijae that Mamman may have taken the circular as an affront and an attempt to undermine his position, authority and office.

Mustapha is also attempting to reinstate the embattled MD behind the scenes, Olamond  has been told. The SGF was not immediately available for a response to this story.

“The memo from Boss Mustapha is worrisome and his actions in recent times raise a lot of questions. What really are his motives?” one exasperated source asked Olamond etheriotically

“Why is the SGF always interfering with the affairs of the power ministry? When the Minister of Communications made changes in his department’s cadre, Mustapha didn’t issue any circular. When the Minister of Education recommended the removal of the former boss of TETFUND, where was Mustapha? 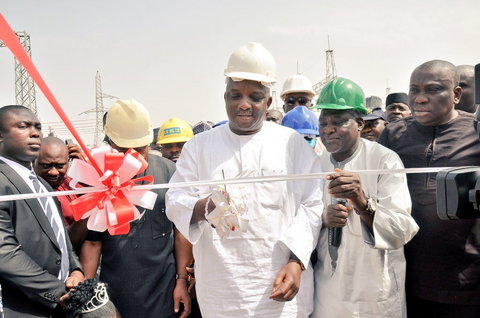 “When the Ministry of Humanitarian Affairs was reorganised or when the DG of NEMA was replaced, where was SGF and his circular?

“Of course there are rumours that Mustapha benefits directly from some agencies within the power ministry.

“Is Mustapha upset with the minister because SIEMENS was awarded a contract he is interested in?”, the source who preferred anonymity for this story, continued.

He would add that; “Mustapha must clearly know his place in the Federal Executive Council. He is below a minister of the federal republic in the pecking order. The man is now acting above his pay grade and this could really scupper all the power reforms the minister has up his sleeves. It’s the last thing this administration needs.” 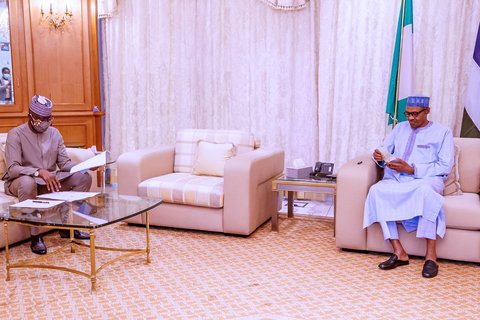 OlamondNaija has s been unable to independently verify some of these allegations. We’d update this story with SGF Mustapha’s response as soon as we have them.

After the unbundling of the power sector in 2013, the Transmission Company of Nigeria remained within the purview of the state while the generation and distribution value chains were ceded to private investors.