Everyone thinks they know how easy it is to get pregnant and for the most part, it’s a pretty simple process but what happens when you fall pregnant from the most surprising of ways? Here’s how!

Pregnancy happens when a man’s sperm fertilises a woman’s egg, which can happen even if you’ve not had sexual intercourse. During sex, semen is ejaculated from the man’s penis into the woman’s vagina. A man’s semen contains millions of sperm. One ejaculation can contain more than 300 million sperm.

A woman’s ovaries release one or more eggs (ovulation) 12-16 days before her next period. The man’s sperm enters the woman’s body through her vagina, then travels through her cervix and womb to the fallopian tubes, where an egg is fertilised (conception). The egg can be fertilised by sperm contained in semen or pre-ejaculate.

This is the common way in which most couples have reproduce but in this life, nothing is so straightforward and there are ways in which one can become pregnant that defies convention.

It’s possible for you to get pregnant without having sexual intercourse if. Although, the risk of getting pregnant in this way is very low because sperm can only live for a short time outside of the body.

However, if you’re not planning a pregnancy, it’s important to know that it’s possible to get pregnant in these 7 surprising ways. 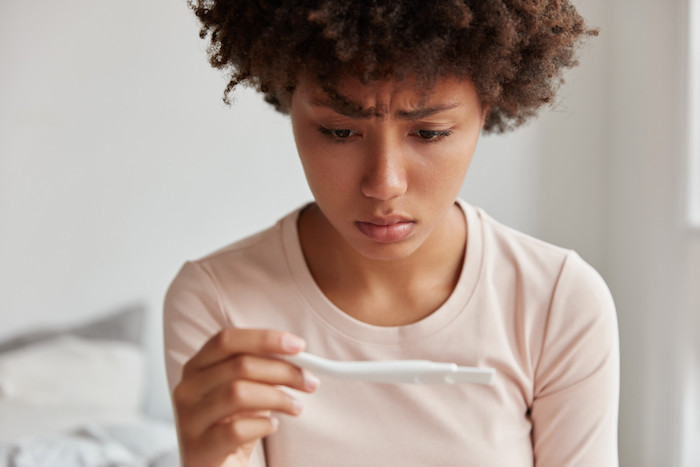 Check out these 7 surprising ways that you can get pregnant [Credit: Minority Health]

It’s no secret that dry humping without underwear can cause pregnancy, but did you know you can still get pregnant with your underwear on? Although quite rare, it is possible if the man’s semen leaks through the opening of his boxers or the woman’s underwear. Particularly powerful sperm can find its way inside the vagina and fertilise the egg.

2. You can get pregnant when you’re already pregnant

This is strange and uncommon phenomenon is called superfetation. It occurs when you’re already pregnant and continue ovulating. The second fertilised egg implants in the lining of the womb, resulting in a second pregnancy.

Oil-based lubes and condoms don’t mix. These types of lube break down the latex and create microscopic holes in the condom, increasing your chances of getting pregnant..

While it significantly decreases your chances of getting pregnant (over 99% in fact), it still isn’t 100% effective. In fact, any contraceptive has a small failure rate associated with it.

5. Having sex on your period

Sperm can live inside you for up to five days. That means if you have sex towards the end of your bleeding and you ovulate early, you could actually conceive.

6. If you take Emergency Contraception

7. Ripping a condom with your teeth

In the heat of the moment, rushing and using your teeth to get the packet open is a big no-no. You can accidentally puncture the condom without realising it.

E!News Davido’s fiancee, Chioma gets tattoo of their son’s name...

ABOUT US
Olamond Naija is a distinctive news reporting organization that is always ready to feed great minds with excellent information. contact us: +2347067443348
Contact us: olamondnaija@gmail.com
FOLLOW US
© Olamond Naija 2016 - 2020