President Muhammadu Buhari in his Independence Day speech appealed to Nigerians to see themselves first as Nigerians instead of people from different parts of the country.

Buhari’s administration has for years been accused numerous times of worsening ethnic divisions that have plagued the country for decades, with the president himself accused of clannishness with policies and appointments.

In an y independent Day speech delivered early on Thursday, October 1, 2020, the president said Nigeria’s founding fathers worked towards the country’s unification in a politically stable and viable entity.

He said Nigerians must uphold that legacy and ensure that the country’s interests are always prioritised over individual interests.

“The stereotype of thinking of ourselves as coming from one part of the country before seeing ourselves as Nigerians is a key starting point to project us on the road to our deserved nation’s evolution and integration,” he said. 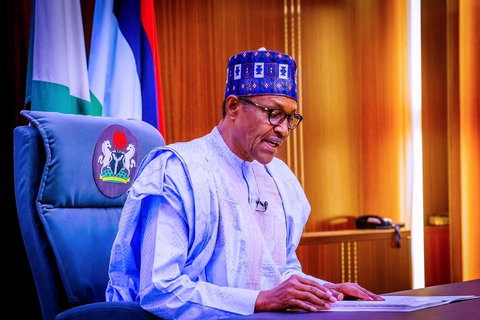 The 77-year-old said an underlying cause of the divisions across the country is the consistent picking at fault lines that separate the nation’s diverse groups.

He appealed to the Nigerian people, whom he called ‘assets’, to rally together to begin a process of national healing to eradicate such fault lines.blob:https://olamondnaija.com.ng/43fd072a-dfa1-4c89-bf81-df021399680b

“Together we can change our condition for the better and more importantly, together we can do much more for ourselves and for our country,” the president said.

Buhari assured Nigerians that, despite numerous challenges, his administration, first elected in 2015, is laying a solid foundation for a sustainable future.

He said Nigerians must work with his government to ensure that the set goals are achieved for the good of the country.

The president said the critical challenges to be overcome include enthroning a democratic culture that empowers the people; supporting the enthronement of the rule of law that ensures accountability from elected officials; increasing commitment to peaceful co-existence; and harnessing Nigeria’s human and natural resources to boost the economy.

He also reiterated his government’s commitment to lifting 100 million Nigerians out of poverty in 10 years; strengthening institutions to make them stronger in protecting national interests; and ensuring tolerance in diversity takes root.

Wizkid and Burna Boy are ‘gods of drip’ in new strategically-timed...